It’s still too early in the storm to get a photo of what kind of damage is happening right now as 60 mph wind gusts ravage the middle Atlantic states. While most folks are worrying about not having 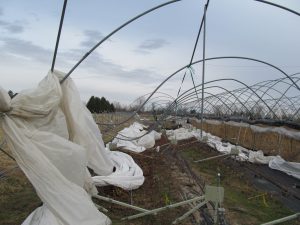 power at home to cook or charge up their devices, farmers have it extra hard.

What happens when farmers lose power? 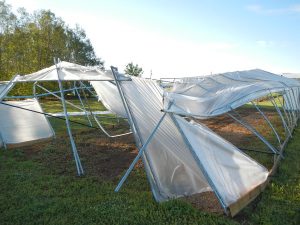 mber preparing for an oncoming Hurricane a number of years back. I was new to having a greenhouse on-site. My intuition was to open it all up and let the wind blow through. But just to make sure, I called my greenhouse supplier, Atlas Greenhouse, and asked them. Well, in this case, I couldn’t have been more wrong. The wise industry folks told me to do the opposite, close her up as tight as possible. They said if the wind got inside, the chances of the whole thing getting lifted and flying away increased dramatically. Hunker down is the best advise of all.

But what if you can’t really seal up the whole structure tightly? Well, then, that’s a whole other story. Here’s what happened to us a couple years ago. I had a high tunnel with roll down side (love ’em), gable end louvers, and a door at each end. Because we were cheap, we didn’t buy the endwall pre-made from the manufacturer, because we could make them cheaper ourselves. Sounds good….until the design to keep the doors shut and plastic covered fails. You know what happens then? Right, the wind opens the door, the wind rushes in full force and has to get out somewhere, so it busts right through the side wall – ripping the plastic up out of the wiggle wire. So much pressure, that air has got to escape somewhere.

So, which is it? If you really can’t batten down the hatches fully, then leave the sucker wide open! But extremely well anchored. Otherwise, it’s Mary Poppins, and off she blows down the lane.